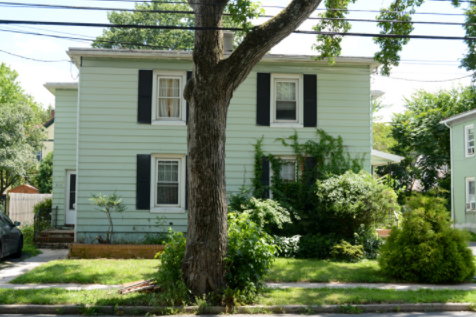 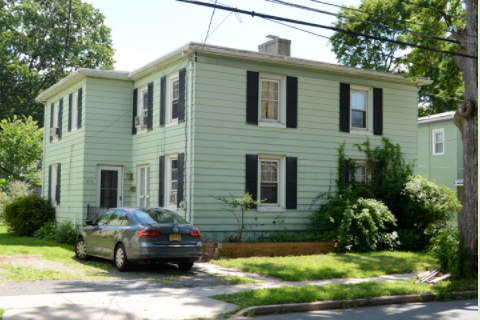 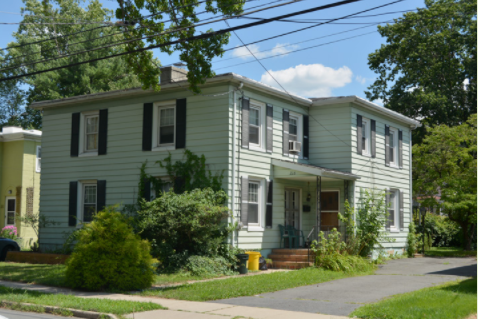 The property contains a center building of the six Rainbow houses, T-shaped twins that were originally more similar in appearance. The building has a low-pitched hipped roof with a rectangular brick chimney on the ridge and extended eaves. The walls are clad with aluminum siding. Fenestration consists of replacement 6x1 double hung sash windows, most with inoperable shutters. The windows are arranged symmetrically over the wall surface: two bays facing the street and four on the side walls. The entrances are replacement doors located on the fronts of the crossbar sections, set back from the street. The west unit retains its original porch over the entrance, supported by a corner iron post and accessed by brick stairs leading down to grade; the east porch has been removed. The house has a concrete foundation with horizontal basement windows.

The Rainbow Houses were constructed c. 1930 by Edgar Palmer's company, Princeton Municipal Improvement, Inc. Historic maps show a vacant parcel in this location as late as the Sanborn atlas of 1918, part of the former Albert S. Leigh Farm. This house and the other Rainbow Houses appear on all historic aerials beginning with 1931.